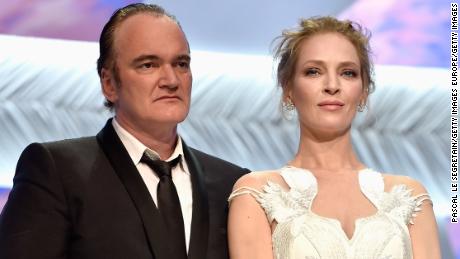 Quentin Tarantino called the car crash that injured Uma Thurman on the set of their film "Kill Bill" "one of the biggest regrets" of his life.
In a lengthy interview with Deadline published Monday, the director broke his silence about the incident that Thurman shared in an interview published over the weekend with the New York Times.
"It was heartbreaking," Tarantino said. "Beyond one of the biggest regrets of my career, it is one of the biggest regrets of my life. For a myriad of reasons."
In speaking with Times columnist Maureen Dowd, Thurman talked about the crash as part of a series of disturbing incidents she said she had with now disgraced movie mogul Harvey Weinstein, including an alleged assault in his London hotel room.
Related: Uma Thurman - Harvey Weinstein assaulted me
Thurman starred in several blockbuster films produced by Weinstein, who has been accused of sexual misconduct by more than 60 women over a period of decades.
Through a spokesperson, Weinstein has consistently denied any allegations of non-consensual sex.
When reached over the weekend by CNN, a spokesman for Weinstein sent photos of him and Thurman together to "demonstrate the strong relationship Mr. Weinstein and Ms. Thurman had had over the years."
"Mr. Weinstein acknowledges making an awkward pass 25 years ago at Ms. Thurman in England after misreading her signals, after a flirtatious exchange in Paris, for which he immediately apologized and deeply regrets," the spokesperson said. "However, her claims about being physically assaulted are untrue."
Thurman said talking about Weinstein also dredged up painful memories of what she says occurred with Tarantino, her "Kill Bill" and "Pulp Fiction" director and long-time collaborator on projects with Weinstein.
The actress said Tarantino pressured her into driving during a now famous 2003 "Kill Bill" car scene, despite the fact she wanted a stunt person to do it.
"Quentin came in my trailer and didn't like to hear no, like any director," she said. "He was furious because I'd cost them a lot of time. But I was scared. He said: 'I promise you the car is fine. It's a straight piece of road.'"
Thurman crashed (footage from the crash was published by the Times) and suffered neck and knee injuries she says still bother her to this day.
After the crash, she says she was denied access to the footage by Miramax studios unless she signed an agreement "releasing them of any consequences of my future pain and suffering," which she refused to do.
Thurman said she obtained the footage now, 15 years later, with the help of Tarantino, though their relationship was damaged by the incident.
In his interview with Deadline, Tarantino remembers the crash differently.
He said he drove the road in the car before Thurman without incident and assured her it was safe. But when Thurman drove the car in the opposite direction for the scene, there was an S-curve that, he claims, led her to crash.
Tarantino said trust was broken between him and Thurman and he takes responsibility for his actions.
"She blamed me for the crash and she had a right to blame me for the crash," he said. "I didn't mean to do it. I talked her into getting in the car, I assured her the road was safe. And it wasn't."
Thurman shared the crash footage in an Instagram post on Monday.
"Quentin Tarantino, was deeply regretful and remains remorseful about this sorry event, and gave me the footage years later so i could expose it and let it see the light of day, regardless of it most likely being an event for which justice will never be possible," Thurman wrote.
"He also did so with full knowledge it could cause him personal harm, and I am proud of him for doing the right thing and for his courage," she added.
Thurman wrote that she holds Weinstein and the production team responsible for what she views as a "cover-up" after the accident.
"They lied, destroyed evidence, and continue to lie about the permanent harm they caused and then chose to suppress," she wrote. "The cover-up did have malicious intent, and shame on these three for all eternity."
A spokesperson for Weinstein provided a statement to CNN Tuesday denying any involvement in a cover-up.
"Harvey has tremendous affection for Uma Thurman nevertheless he denies these allegations," the statement read. "He did not give instructions to destroy the vehicle or orchestrate a cover-up and this is the first time he has learned that Ms. Thurman had any issues regarding the handling of her accident. In fact, she continued working with Mr. Weinstein on three more films, including 'The War with Grandpa' which was scheduled to be released this year."