Chia sẻ
Tweet
In 2017, the South China Sea was the world's forgotten flashpoint.
Eclipsed by North Korea and overlooked by a Trump administration that has left many Asia positions unfilled, the lack of attention given to the disputed waters allowed China to press ahead with its military build-up on reclaimed land and work to placate the countries that contest its sweeping maritime claims.
"The water was beautiful for China in the South China Sea in 2017," said Michael Fuchs, a senior fellow at the Center for American Progress.
But that could change in 2018, if an over-confident Beijing overplays its hand, forcing Washington and its allies to react.

Though most analysts agree the White House has put the issue on the back burner, there is disagreement as to why.
At the start of the year, it appeared that the Trump administration would take a more muscular approach to the South China Sea.
"Building islands and then putting military assets on those islands is akin to Russia's taking of Crimea. Its taking of territory that others lay claim to," Secretary of State Rex Tillerson said in his confirmation hearing in January.
"We're going to have to send China a clear signal that first, the island-building stops, and second, your access to those islands also not going to be allowed." 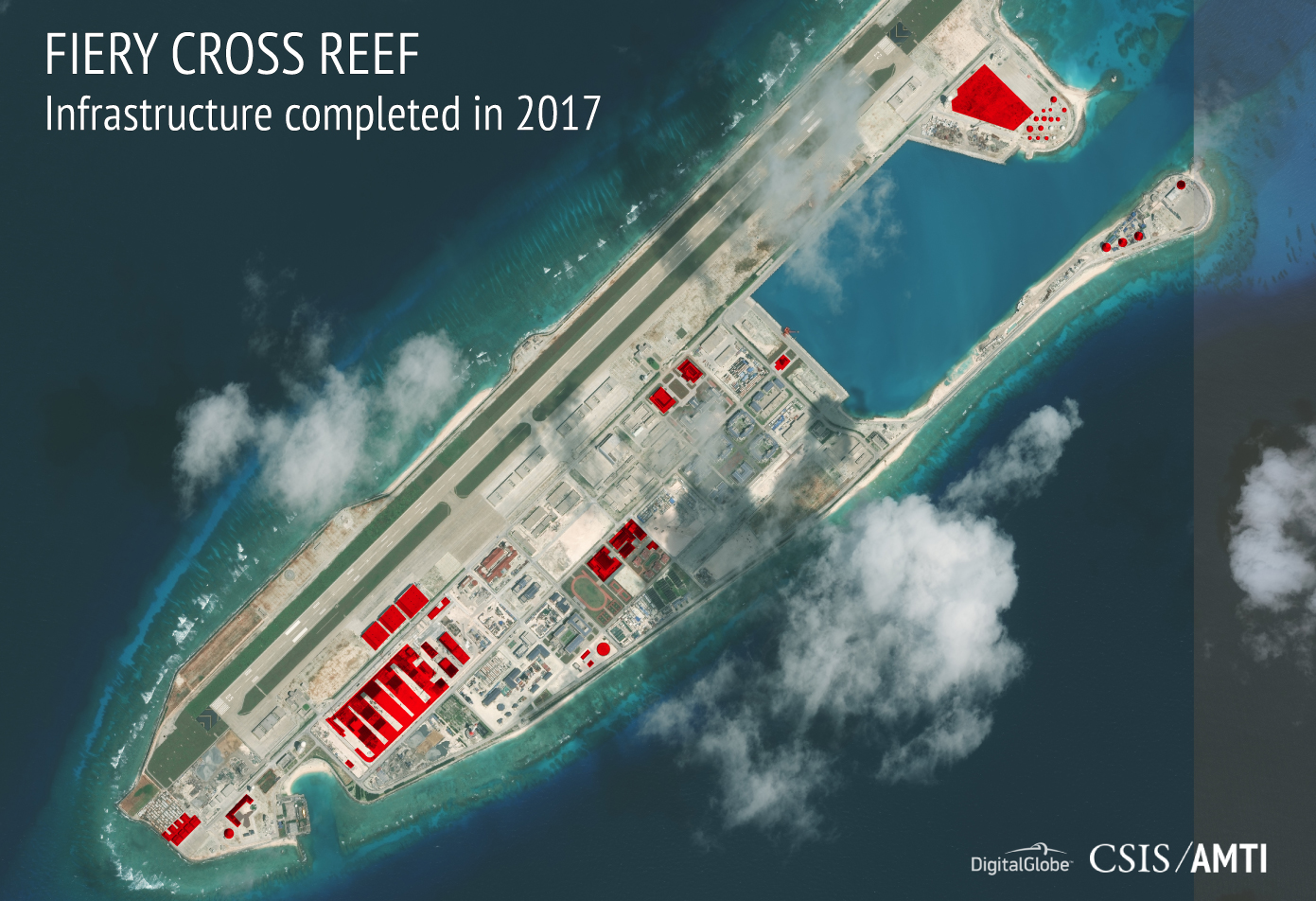 This satellite image shows construction on Fiery Cross, a reef occupied by China.

But it was North Korea's nuclear program that emerged as the top priority for the Trump administration, which now identifies Pyongyang's weapons as a clear and present danger to the US homeland.
Trump and his Secretary of State have come under fire for failing to fill multiple diplomatic posts and the focus on North Korea may have cannibalized the State Department's resources on other issues in Asia.
"It's no secret that the Trump administration is still woefully understaffed when it comes to the Asia squad," said Gregory Poling, the director of the Asia Maritime Transparency Initiative (AMTI).
"It's no surprise that they can't focus on anything but North Korea. And occasionally they talk about trade deficits with China, but that's it."
Other critics say the President simply doesn't give the conflict the same weight as his predecessor did, though many note the Department of Defense has continued to bring the issue to the fore as best it can. 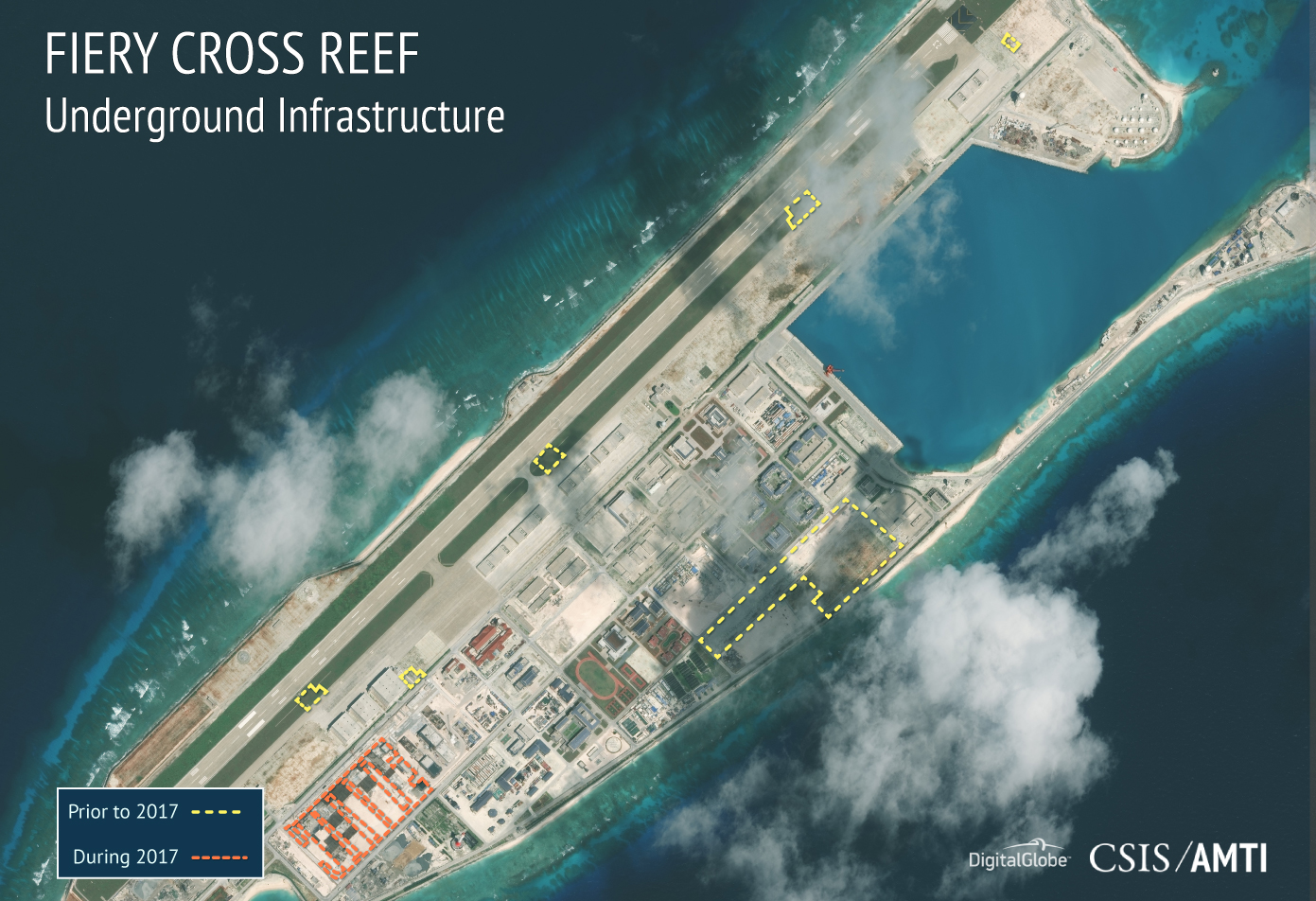 Compared to North Korea, the South China Sea doesn't have the same immediate life-and-death consequences as nuclear-tipped ballistic missiles.
Instead, it requires the Trump administration to push back at Beijing's attempts to encroach on the sovereignty of its neighbors and trying to control trade routes, violations of the so called "rules-based order" that the United States has championed globally since the end of World War II.
"The South China Sea appeals somewhat less naturally to someone like President Trump because it's about abstract defenses of norms and systemic stability," said Euan Graham, the director of international security at Australia's Lowy Institute.

Trump's administration gave the South China Sea a short mention on page 46 of its newly unveiled 68-page National Security Strategy.
The document said Beijing's "efforts to build and militarize outposts in the South China Sea endanger the free flow of trade, threaten the sovereignty of other nations, and undermine regional stability."
Analysts believe, for now at least, that mention was little more than lip service.
"The Chinese continue to pace with their long-term strategy to gain de facto control over the sea lanes in the South China Sea. And what changed is the United States stopped paying attention," said Fuchs, who served as the State Department's deputy assistant secretary of state for East Asian and Pacific affairs from 2013 until 2016.
The United States has continued to conduct freedom of navigation operations, which involve sailing ships through waters to challenge what Washington deems to be overzealous maritime claims. In these operations, US ships will sail very close to the islands China controls, often triggering heated warnings from Chinese coastal patrols.
But there is a sense of South China Sea fatigue, according to Poling.
"After three years of sensational photos splashed across every paper of Chinese island building, that somehow became the new normal," said Poling.

Philippines President Rodrigo Duterte's desire to cozy up to China, as well as a more inward-looking Indonesia and Malaysia, all helped China advance its interests in the region.
And diplomatic efforts to find a peaceful solution to the South China Sea did move forward.
China and the Association of Southeast Asian Nations (ASEAN) agreed to a framework for a Code of Conduct, a formalized process for dispute settlement.
But critics believe the watered-down document, which failed to mention island militarization and may not even be legally binding once finalized, were victories for Beijing. Vietnam was the only country to voice its opposition.
But without the continued strong backing of other ASEAN states and the US, Hanoi does not have the same support it enjoyed in the past.
"Vietnam is in a tough spot. I think they have red lines, and if the Chinese don't cross them they're willing to play nice right now," said Poling.

Experts believe this is all part of Beijing's strategy of patience in the South China Sea.
China's leaders are playing a long game, waiting for rivals to either slip up or lose interest while using its economic leverage to influence smaller states who claim a part of the disputed waters.
"Beijing's opinion has been for the last decade that it was never worth provoking an immediate crisis in the South China Sea, because sooner or later, the Americans would lose focus and that we (the US) just wouldn't be able to maintain high-level political concern about this from administration to administration. And it looks like they were right, at least right now," said Poling of AMTI.
But hubris could foil China's current advantage, Poling says, if China convinces themselves that they won't have problems with the other claimants in the region
"What seems likely to me is that China will eventually overplay its hand here, because in Beijing, the only concern seems to be with Washington," he said.
"I hear an awful lot of premature triumphalism in China that the region -- the Philippines and Vietnam and Singapore -- are all in the bag and if the Americans just got out of the way, the rest of Asia would kind of accede to Chinese hegemony."

Multiple analysts predict if Washington continues on its current path, Australia, India and Japan -- US treaty allies -- would get more involved in the South China Sea to ensure the sea lanes are open for trade.
Talks over the Code of Conduct are likely to continue. China could begin using its newly constructed military installations by deploying more aircraft, vessels and personnel.
"They didn't build all these hangers and airstrips so they can never use them," said Poling.
If things continue on their current trajectory, it's a boon for Beijing. But to say China has already won is misleading, according to Graham at the Lowy Institute.
"The fundamental metrics of American power, including the economic revival of the United States, are not to be underestimated," said Graham.
"The key question is, will that be translated into the political will to go and show leadership, especially on these issues that are not immediately sell-able to a skeptical public and Congress because they're more about abstracts and systemic order."